Hickenlooper in Running for Cabinet Position

Interior is out due to John Hickenlooper’s position on fracking, but Commerce may be a possibility.

Elana Schor at Politico wrote a long item on Thursday (9-1-16) reviewing Hickenlooper’s issues with the Democratic Party’s far left on the environment, but described his generally positive reviews on receiving some position in a prospective Hillary Clinton’s cabinet. Commerce Secretary appeared a good fit.


Floyd Ciruli, a veteran Colorado pollster and political analyst, noted that Hickenlooper's close ties to Clinton transition team leader Ken Salazar and Sen. Michael Bennet (D-Colo.), a superdelegate for the Democratic nominee, position the governor well for a Cabinet appointment. "He's an outsider, an entrepreneur, socially liberal but on energy and general market issues he tends toward the moderate side of things," Ciruli said. "That’s a good thing. That’s an asset."

Ciruli, the veteran Colorado pollster, pointed to Hickenlooper's multiple overseas trips as governor as evidence of his affinity for encouraging free trade and foreign investment. "He saw his role as a trade representative and went out a lot," Ciruli said. "He was seen as pretty successful at it."

Hickenlooper’s other advantages for an appointment are being well-thought of in the state and having an acceptable lieutenant governor. Morning Consult, a new online panel polling organization, did a 66,000 survey of the approval rating of all 50 state governors, and Hickenlooper was in the upper tier at 60 percent approval. He was ahead of Jerry Brown (57%), but behind his colleague in Utah, Gary Herbert (64%). Our neighbor to the north, Matt Mead, is near the top of the national list (67% approval). 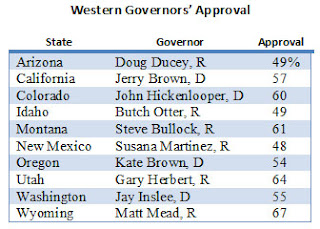