It’s getting late for Mr. Trump

In spite of bringing in a new management team and beginning a professional campaign with targeted advertising and a more focused use of the candidate, the Trump campaign approaching Labor Day is behind in all the forecasts. 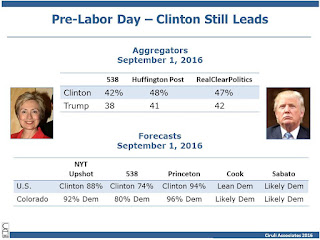 Donald Trump has also been getting help from his opponent’s non-response to a daily barrage of bad news on e-mails and the Clinton Foundation.

The main polls of polls (aggregators) have Trump behind from 4 points in 538 (Silver), to 7 points in Huffington Post and 5 in RealClearPolitics.

The forecasts see Clinton the likely winner, both in Colorado and nationally. As Nate Silver likes to point out, NFL kickers do miss from the 20 yard line, but not often.

If Trump does not show progress in the first wave of post-Labor Day polls, which will come out starting next weekend (Sept. 10-13), the narrative will be set that he’s in deep trouble very late in the campaign.

Read The Buzz: The Forecasts Begin
Posted by Floyd Ciruli at 1:11:00 PM