Out of 13 states being tracked, Trump now is winning 7 and Clinton 6 by RealClearPolitics count. Silver’s 538 forecast has Clinton winning 283 electoral votes, but RealClearPolitics only gives 272 (needed 270). Colorado is now 2 points, a drop of 8 points since mid-August. 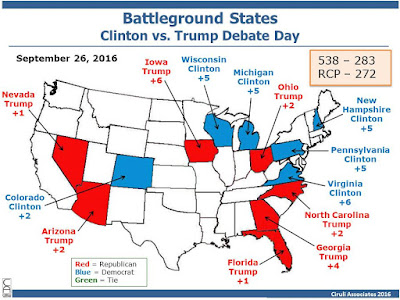 The race is 2 points between the frontrunners because Trump is beating Clinton by 9 points among independents. Johnson and Jill Stein are also gathering in 21 percent of independents.
Posted by Floyd Ciruli at 3:17:00 PM