Michael Bennet continues to lead the Colorado senate race by double-digits. In the latest Quinnipiac poll, Bennet received 52 percent to Darryl Glenn’s 43 percent – modest change from the 54 percent to 38 percent in the August 18 Quinnipiac poll.

Mail-out ballots are expected to arrive on October 19. Glenn has less than a month to close a significant gap. 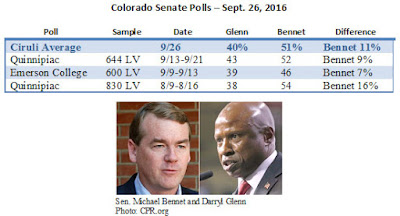 A few more visits by Darryl to Gun Owners groups and he will have it locked up.