The November 9 fundraiser with a liberal elite constituency (Barbara Streisand on the vocals) in downtown Manhattan where Hillary Clinton described many of Donald Trump’s supporters as “deplorables” provided an easily mocked forum that immediately produced a firestorm of criticism on social media, in Trump’s speeches and in a rapid response advertisement. The timing was equally bad after weeks of inaction and declining polls, followed by the November 11 faint.

Not only was Clinton wrong in her characterization of the majority of Trump supporters, but the woman who had historically represented the more moderate, less educated and older members of the Democratic Party in primaries against Barack Obama in 2008 and Bernie Sanders, this cycle just told many of them she thought many were “deplorable.”

Unfortunately for her, many of them are still conflicted on this race, even though they are registered Democrats. They are concentrated in the old industrial blue collar areas of Ohio and North Carolina where the race is starting to slip away from Clinton. They don’t consider themselves racist, but do feel the Democratic Party has increasingly become fixated on identity politics and their identity – white working and struggling middle class – is ignored by the party’s coastal and urban elites.

Clinton described about 40 percent of the electorate or Donald Trump voters as divided between those who are acceptable because their populist fervor is based on economics or class anxiety and half who are “deplorable” because they are “racist, sexist, homophobic, xenophobic and Islamophobic – you name it.”

The Washington Post analyzed Trump supporters using two measures: economic and racial anxiety. Their finding was that 26 percent of Trump’s supporters are primarily concerned with race and believe “Whites are losing out in America” and 20 percent are primarily concerned about the economic struggles of lower class Americans. But that a quarter of Trump supporters are attracted for a myriad of other reasons than race and class and another quarter feature both issues as important.

This dichotomy does not capture the full range of Clinton’s description, but it demonstrates that beyond the foolishness of writing off huge swathes of the electorate, things are a lot more complex than what appears on the surface. A significant percentage of Trump’s support is made up of people who increasingly believe Clinton hasn’t given them a persuasive reason to support her and who she believes are “deplorable.” 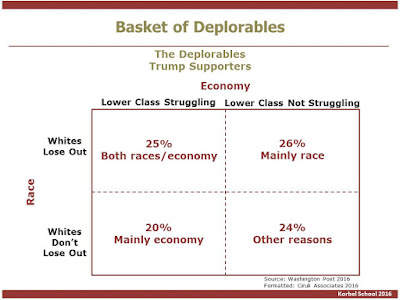