Will the expected low turnout election make a difference in the outcome? Where are the major fights? In a Monday morning conversation with KOA’s April Zesbaugh and Marty Lenz, the November 2 election highlights were reviewed. 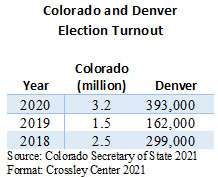 In off-year elections, such as 2019, Colorado voters appear to be more conservative, defeating a TABOR override in 2019. Denver in that same election voted 83 percent against an initiative to expand homeless camping rights. This year, Denver will vote to enforce a very strict anti-camping ban. During the conversation, Marty announced a Denver judge had just ruled the ban’s enforcement mechanism infringed on the city authority to carry out “administrative functions.” I was not certain of the effect of the ruling. Many voters had already been told of questionable legality of the initiative and they are simply angry the homeless problem appears to be getting worse, not better, after numerous programs and spending.

Education will be one of the biggest topics in the election, with school boards around the state facing expensive fights over board seats. The traditional battles between teacher unions and reformers, who prefer charter schools and performance measures, have been augmented by national issues, such as masks, vaccinations, mandates and quarantines.

Statewide Initiative 119 would raise marijuana taxes for enhanced education programming for public secondary schoolchildren. It would raise the marijuana tax by 5 percent. Although it has bipartisan support, some educators have opposed it saying the benefits are too ill-defined. Education tends to be a popular item and Colorado municipal voters have been supporting marijuana taxes frequently in recent years.