Will the Denver Camping Ban Pass by 80%?

Denver is a very liberal city. It gave Joe Biden 80 percent of its vote in 2020, but it may be headed for a revolt over widespread homeless camps.

In 2019, Denver voters crushed by 83 percent an effort by homeless advocates to legalize public camping. In 2020, city voters approved a 0.25 percent tax increase for the homeless, but the problem hardly receded, rather it grew more visible, requiring more dramatic actions, such as a ban on camping in the Civic Center. However, homeless camps appear to simply move to other sidewalks, vacant lots and parks. In reaction, Initiative 303 has been placed on the ballot. It would enforce a camping ban on private property, with property owners holding the city legally liable if they don’t take action. In response, many city leaders and civic groups are opposing it. The sponsor is the head of the out-of-power Republican Party in Denver. But if it passes, it will be a sign of a full-scale revolt over homelessness in Denver.

The homeless isn’t the only challenge bedeviling Denver’s political establishment. A host of other city initiatives are being resisted by proposals on the November ballot that could open the 2023 city council and mayor’s races to a wild moment in the city’s political history.

These three issues will indicate if Denver continues its progressive direction or shifts to the right on some issues. 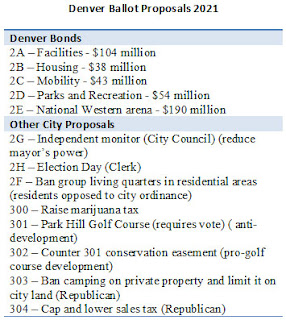