A low, but overwhelmingly Democratic voter turnout supported four of five city bond initiatives, but said “no” to the $190 million National Western arena – a loss that many predicted.

While the controversial arena proposal lost, the City did receive approval for four other bonds for a total of $260 million benefiting transportation projects, libraries, cultural facilities, housing and parks projects. They each received about 60 percent voter support. But on the fifth item, a third of those voters shifted sides and said “no” to the arena (58% voted no).

With 89,000 Democratic voters to 19,000 Republican, being a Republican-labeled initiative was a fatal burden. The cap on taxes was crushed and the camping ban lost, although by smaller a percentage. 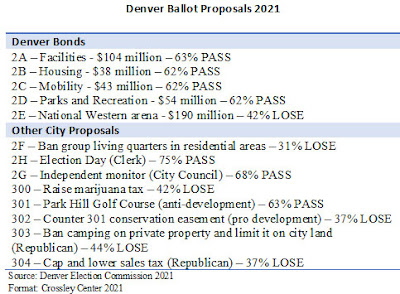 Shockingly, I agreed 100% with my fellow voters.