Voter turnout appears to be just above the modest turnout in 2019 of 1.5 million. The count was 1,565,994 as of Wednesday, November 3. I predicted 1.5 million on the Monday before Election Day (see KOA blog). Presidential elections in Colorado now can reach a turnout of 3.2 million voters (2020) and the last midterm saw 2.5 million voters (2018). 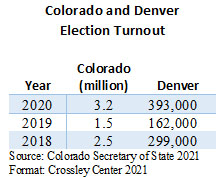 Voters said “no” across-the-board to statewide ballot measures. They defeated an increased marijuana tax for educational programming (54% no), a property tax assessment decrease (57% no) and a requirement that all state spending (e.g., federal funds) must go through the state legislative process (56% no). The three measures lacked much attention and the general mood of the few voters wasn’t supportive of Republican-driven statewide initiatives (Colorado Rising) or an ill-defined new tax initiative on marijuana for education. Although it had some bipartisan support and funding, and Governors Bill Owens and Bill Ritter and Mayors Wellington Webb and Federico Pena supported it, the Democratic Party called it a back-door voucher program.

In the few off-year elections held in Colorado, turnout tends to be low. In 2019, Colorado voters said “no” to a TABOR override, which had bipartisan support and a well-financed campaign.

Thanks for sharing your amazing thoughts. It’s really nice and well-explained blog. Are you looking for farewell message to colleague leaving the company