The U.S. Supreme Court may strike down Roe v. Wade this term as it considers abortion cases on appeal. Although the American public is divided about the moral dimension of abortion, a strong majority support Roe v. Wade and its legal protections, which conservative-dominated legislatures continue to restrict. The Washington Post reports in a Nov. 7-10, 2021 national poll (1,001 U.S. adults) that 60 percent of the public support the upholding the 1973 ruling whereas only 27 percent would overrule it. 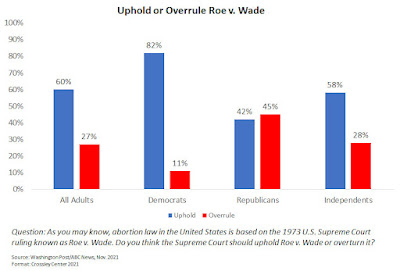 Democrats overwhelmingly support it (82%), but interestingly, Republicans are divided with 42 percent favoring maintaining it to 45 percent supporting overturning the ruling. The assertive anti-Roe v. Wade Republican officeholders are representing a very divided party and an opposed general public on the issue.