Supreme Court Justice Monica Márquez just delivered a unanimous court approval of the Colorado Independent Redistricting Commission plan for congressional redistricting. The decision will start the 2022 congressional races for seven seats with incumbents and one new competitive seat in the North Denver to Greeley area.

Márquez responded to complaints and appeals with approval of the Commission and its process. She dismissed the objections raised by Democrats and Latino groups arguing the Commission acted within its authority to enforce state constitutional requirements and didn’t abuse its discretion. Her praise of the overall process was fulsome:

“This year has marked a watershed for congressional redistricting in Colorado. For the first time, the state’s congressional district map is not the product of politics or litigation; it is instead the product of public input, transparent deliberation, and compromise among twelve ordinary voters representing the diversity of our state.” 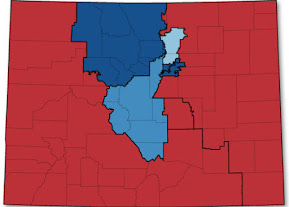 All seven incumbents have a partisan advantage. Republicans did much better than expected and could end up with a 4-4 delegation. Lauren Boebert, who is the Democrats’ main target, was given a better district than she currently serves. Her most serious opponents’ home isn’t in the district. Republicans are at least competitive in Ed Perlmutter’s newly designed 7th CD and they start in a strong position in the new very competitive 8th district.

Given President Biden and the Democrats poor positions nationally, Republicans could be running with a tailwind in 2022.

Thanks for sharing this amazing content. Your information is really very outstanding to read. Keep it up and best of luck with your future updates. are temp agencies worth it