Charles Franklin, Director of Marquette Law School Poll and Professor Emeritus at UW-Madison, published a chart that reinforces the point that the Democrats face a very difficult history in holding the House – much better for the Senate (although, any loss would be fatal in 2022 – 2.3 average loss). As the chart displays, but for a few exceptions, a 26-seat loss can be expected November 2022. 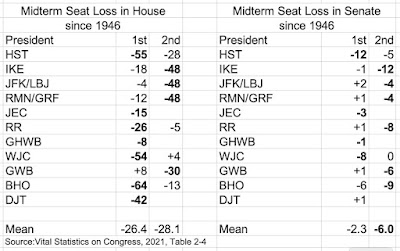 Political scientists have provided numerous theories as to the mechanisms that appear to drive this result. Because the elections are a relatively small sample (11) and each involve significant variations, at best one can list some most relevant reasons and fit them to the apparent circumstances one year out to November 2022.

Given the polarization and closeness of recent elections, it may not be likely the Republicans win 26 seats, but it will be extremely likely they can win a third of that number and control of the House.

Read The Buzz: The House is Lost for Democrats?