Europe will be months, if not years, identifying its new leaders and direction. The shock of the UK leaving the European Union is still being absorbed – with the AUKUS agreement between the UK, US and Australia sans France reverberating. With Angela Merkel, the consensus-inclined EU leader, retiring and her electorate splintered among parties, Germany will likely need months to sort out a government and it may not be cohesive.

France’s Emmanuel Macron always aspires to lead Europe in a more independent direction, but there is resistance in the EU to his vision and he must face an unruly French electorate next spring. 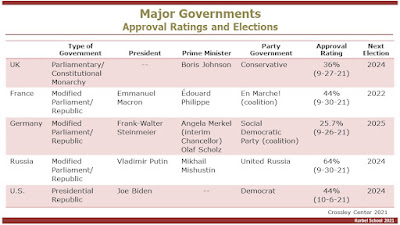 Russia’s Vladimir Putin, while long of tooth, remains a dangerous expansionist nationalist. After recent parliamentary elections, he is even more secure and ever disruptive of the West and democracy.

President Joe Biden began his administration declaring America is back and European allies a priority. The statements were more aspirational than factual. America is still politically gridlocked and threatened by a 2024 nationalist revival. In addition, the U.S. looks to Asia as the next theater of global competition.

All in all, Europe is facing a deep set of challenges with no clear leader or direction.

Read The Buzz: Germany Has New Leader, But No Clear Direction