Congressional Quarterly’s Roll Call analysis of House seats around the nation after redistricting identifies Colorado’s new 8th District as one of the most competitive in the country. Nathan Gonzales writes under a headline “Competitive new 8th District could help decide the majority”:

“That means Democrats are going to have to work to gain even a single seat in a state that has been trending their way over the last three election cycles.”

Gonzales, a well-known Washington D.C. prognosticator who is the editor and publisher of Inside Elections, reviewed Colorado’s other 7 districts. His assessment was similar to The Buzz, “Predictions on New Congressional Delegation.” 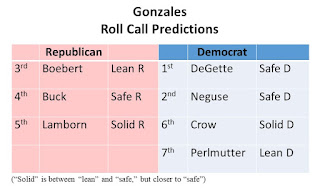 Colorado is a state that has been trending Democratic, but 2022 could be a good Republican year nationally, and all politics today tend to be more national than in the past.