Is American Democracy at the Tipping Point? 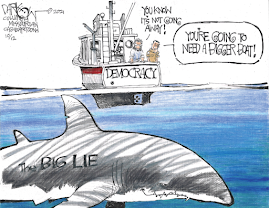 If Trump “makes a successful return to the presidency in 2024, democracy’s done.” (There is Nothing for You Here. Finding Opportunity in the 21st Century, Fiona Hill, Politico interview).

“The destruction of democracy might not come until November 2024, but critical steps in that direction are happening now.” (“Our constitutional crisis is already here,” Robert Kagan, Washington Post column)

“Like an installment of a deathless Marvel franchise, for all its spectacle ‘Peril’ ends with a dismaying sense of prologue.” (Peril, Bob Woodward and Robert Costa, New York Times review)

American news media, opinion pages and talk shows have taken up the danger to democracy posed by the domestic and international trend toward authoritarianism. In the U.S., it’s been an ongoing theme, at least since the January 6 insurrection, and is subject to a flood of books and opinion essays corresponding to the ongoing investigation of January 6 and the renewed 2024 ambition of former President Donald Trump.

The nation’s top public opinion analysts agree that the public perceives a danger to democracy. Also, many harbor beliefs that challenge democratic norms and the system. For example, as the writers above reference, Trump’s election fraud position is becoming the Republican Party’s platform.

This is an amazing site, I enjoyed reading it, will come back to gather some more knowledge. You may want to check out 7 eleven cerca de mi

Nice article I was really impressed seeing this article, it was very interesting and it is very useful for me. You might want to check out spotify discount reddit