The torrent of bad news about the Affordable Care Act is beginning to rapidly move public opinion against President Obama.

The latest Pew Research poll shows a 22-point spread between approval of Obama’s handling of health care and disapproval. 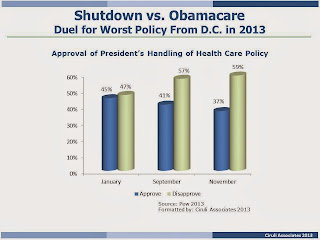 Opinion has shifted rapidly since September and continues to collapse.

His repeated claim that no one loses their coverage if they want to keep it is being belied daily by local headlines of lost coverage. A new Quinnipiac poll shows that people find him untrustworthy and dishonest by 44 percent to 52 percent. His approval rating is collapsing and dropped below 40 percent (39%), with 54 percent disapproval.

Unless Obama can stop the slide, he will completely lose his clout on any second-term agenda items (immigration), lose leverage in the budget negotiations (which he expected to dominate), and begin to watch vulnerable 2014 Democrats break ranks.

So happy to be given a privilege to post a comment here. You have a wonderful site. Thank you for the effort to publish this.

It is great to have the opportunity to read a good quality article with useful information on topics that plenty are interested on.

I really enjoyed reading your article. I found this as an informative and interesting post, so i think it is very useful and knowledgeable. I would like to thank you for the effort you have made in writing this article.

Thank you for posting such a nice article. I’m gonna glance once in awhile on your page to see and read more of your works - great!


I am very happy to visit your site and i did like it. I was able to get some informative topics. keep it up and you can also visit my site for your reference. Thank you and have a good day.

Love it! Very interesting topics, I hope the incoming comments and suggestion are equally positive. Thank you for sharing this information that is actually helpful.

I enjoy reading all your post in your blogs. I guess you are a great blogger beacuse you have a lot of comments in your blogs. Keep on posting. Please inspire more people through your post! Fighting!

There are some interesting closing dates on this article but I don’t know if I see all of them center to heart. There's some validity but I'll take maintain opinion till I look into it further. Good article , thanks and we want extra! Added to FeedBurner as effectively free online casino slots