President Obama is about to lose his legacy due to his fumbled rollout of the Affordable Care Act (ACA).

There is irony in the collapse of support as Obama has been absolutely rigid in arguing the Act couldn’t be modified or delayed, but now to salvage it, he must delay, modify and apologize. His four years of intransigence contributed to the problem. His newly found flexibility is unlikely to improve peoples’ views of him or support for ACA.

His overall approval rating is now below 40 percent and approval of handling of health care only 37 percent. And, support for the ACA, which was never above 50 percent, is now 15 points in negative territory and moving down. 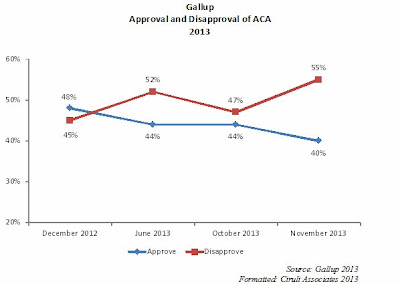 Accelerating the slide is peoples’ longstanding negative expectations and lack of confidence the program was going to be helpful. A Colorado health care poll in September of this year showed Coloradans disapproved of it overwhelmingly (52% to 33%).
Not only has Obamacare become much less likely to be a legacy and more likely a long lingering conflict in American politics, but for the President, Obamacare has become a combination of Katrina and a War in Iraq as he approaches the 2014 midterm.
See:
Gallup: Americans’ approval of healthcare law declines
USA Today: Colorado: Microcosm of confusion on health law
Posted by Floyd Ciruli at 11:38:00 AM