Obama Takes Down the Democratic Ticket

Barack Obama won Colorado’s electoral vote twice, most recently by five points, but today his dismal approval rating and failed health care rollout is taking down the entire Democratic ticket. Senator Mark Udall and Governor John Hickenlooper are both at low points in their career approval ratings as they begin their re-election campaigns.

But, Obama’s 15 point negative approval is even dragging down the Democrats’ presumptive presidential nominee, Hillary Clinton. In a hypothetical match-up with Governor Chris Christie, she now loses Colorado by 6 points, her lowest point this year. 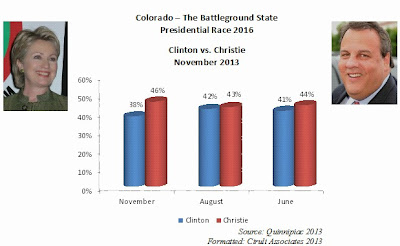 Two takeaways from the latest polls: First, the Washington D.C. contest to produce the worst policy in the American peoples’ view has pushed voters to the edge. If they had a choice of “none of the above,” it would do very well.

Second, there is no doubt that, as of today, Colorado is a battleground state.
See Quinnipiac poll: Christie leads Clinton in Colorado in 2016 race
Posted by Floyd Ciruli at 4:20:00 PM