The I-25 Corridor and Tuesday’s Election

I-25 north of Denver is a seam that divides the state between its pro- and anti-hydrocarbon politics. Four cities west of I-25 will vote Tuesday on fracking bans promoted by local activists and supported by state and national anti-oil and gas interest groups. 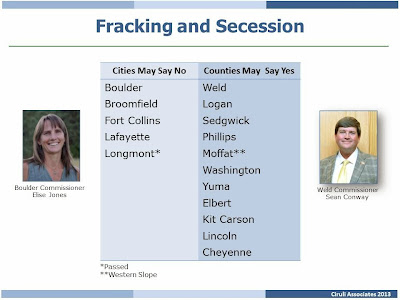 Ten counties east of I-25 are voting to secede from the state due to hostility to the Democratically-controlled legislature and especially its opposition to gas and oil development and aggressive promotion of high cost renewable energy.

The I-25 split is especially difficult for Governor Hickenlooper who supports fracking, which angers his environmental base, but also supports and signed renewable energy legislation.
Posted by Floyd Ciruli at 2:27:00 PM