Fracking may have been banned by voters in five North Front Range Colorado cities (mostly moratoriums, one vote in a recount), but when voters statewide were asked if they support or oppose it, 51 percent said support and 34 percent oppose in a new poll by Quinnipiac University (1,206 voters, Nov. 2013).

Republicans overwhelming support it; Democrats oppose, but only two-to-one; and independents are near the statewide percentage. 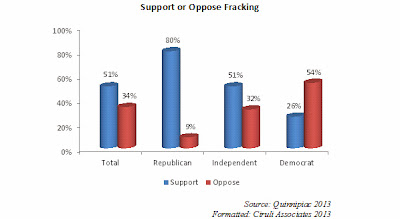 This poll offers good news for Governor Hickenlooper. His is anxious to reach a compromise on fracking rules and regulations to remove it as an issue next year. Its lack of support will help him by encouraging environmentalists to compromise since they lack a statewide majority.

As reported in 9 News:

Ciruli thinks the governor genuinely thinks more regulation is the best policy, but there are politics behind this announcement that can't be ignored.

Oil and gas has been making a splash as a political issue in the state, with voters passing four local-level ballot questions aimed at banning or delaying approval of new drilling operations.

The governor doesn't want this to be a statewide issue when he's up for re-election next year.

“Nothing would be more difficult for him to be a fracking advocate at the same time that many citizens and certainly the environmental movement were actively backing a ban,” Ciruli said.

The Buzz: Hickenlooper and the energy divide

The Buzz: The I-25 Corridor and Tuesday’s election
Posted by Floyd Ciruli at 2:56:00 PM

moratoriums !!
no, moratoria
Floyd, did you flunk high school Latin?