Although President Obama is ultimately responsible of the passage and implementation of the Affordable Care Act (ACA), it was drafted in 2009 by then Speaker Nancy Pelosi and her House Committee colleagues, especially her loyal California caucus members George Miller and Henry Waxman.

The 1,900 plus-page act was weaved together from odd bits of health care legislation and ideas that Congress and especially Democrats had been considering for years, some at least since Hillary Clinton’s failed effort in 1994.

At least one reason Pelosi has remained Minority Leader after the failed effort to retake the House in 2012 was to guard against either Republicans’ efforts to repeal or defund the Act and Obama’s inclination to modify it in light of pending implementation problems. Thus, Pelosi and her House colleagues share responsibility for today’s problems.

Not only is her signature piece of legislation in danger of political collapse, but it may become a significant political drag on Democrats in the 2014 election and the primary cause of her never regaining the Speakership. 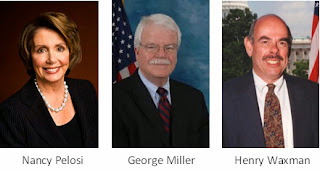