Asia is now the primary U.S. foreign policy theater, Japan its critical ally and China the topic. To explore these changing circumstances, The Crossley Center for Public Opinion Research, with the University of Denver’s Josef Korbel School of International Studies, the Center for China-U.S. Cooperation and the Consulate-General of Japan in Denver, convened a multi-panel program of experts in March 2021 that addressed foreign policy and public opinion amid the threats and opportunities China presents.

The program focused on the new era of relations with China, the strengthening of alliances in the Indo-Pacific and U.S.-Japan defense policy.

YouTube videos of each program are now online and available to view.

Video on “Free and Open Indo-Pacific and China”

Will the two new administrations build an alliance to protect the Indo-Pacific?

A free and open Indo-Pacific from the Northern Pacific to India is a diplomatic, economic and national security goal of the U.S., Japan, and their friends and allies around the world. The challenges it faces from China’s broad claims of sovereignty and hostile behavior and aggressive rhetoric witnessed in Hong Kong, Taiwan, the South China Sea and elsewhere is the topic of this panel of experts from the Korbel School and Doshisha University in Kyoto, Japan. (March 24, 2021)

Video on “Free and Open Indo-Pacific: The Quad”

Can the Quad shift from a concept to reality?

President Joe Biden’s first multilateral meeting was to host the Quad (Quadrilateral Security Dialogue) in its first meeting of heads of government since it was conceived more than a decade ago. The National Security Advisor described the summit of Australia, India, Japan and the U.S. as a “critical part of the architecture of the Indo-Pacific.” (March 29, 2021)

Join a conversation with experts from the U.S. and Japan on the potential for a joint strategy and unified actions on important issues in the Indo-Pacific region. Can Japan, the U.S., Australia and India be a defender of the rule of law and democratic values?

The panelists concluded that a new era has been launched in U.S.-China relations. It is now the primary focus of America’s foreign policy and is affecting domestic policy – from resolving the pandemic, to addressing infrastructure to strengthening democracy. 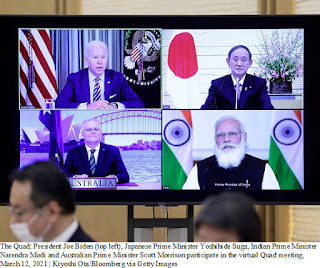 As tension and competition in Asia increases, can China be deterred?

The Crossley Center for Public Opinion Research’s program on U.S. and Japanese diplomacy focused on defense and strategies for avoiding conflict in Asia while protecting a free and open Indo-Pacific region. Join experts on diplomacy, defense and public opinion on the Indo-Pacific region discuss the U.S. and Japanese defense strategy and the Taiwan issue. (March 31, 2021)

The panel was moderated by Floyd Ciruli, director of the Crossley Center.