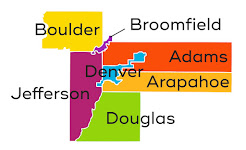 Colorado’s population increased its urbanization in the last decade with five of the ten fastest growing counties in the seven-county Denver metro area and eight on the Front Range (El Paso, Larimer and Weld). But not all growth was equal in the metro area. Boulder (331,000, 12.3%), due to high costs and anti-growth policies, continues to lag behind the state’s average, with Weld County about to pass it in population (Weld 329,000, 30.1%).

Adams and Arapahoe now appear as two of the most likely metro counties for additional population growth. They have considerable areas that can be developed or made more dense. Arapahoe is now the second largest, just behind Denver. If Adams growth pace continues, it will surpass Jefferson County to become the third largest in the metro area. Both counties have significant Hispanic populations. But Arapahoe is more diverse in that along with the Hispanic population (20.7%), there is a substantial black community (10.4%) and Asian (6.4%).

Denver continues to maintain its dominant position, with a massive 19.2 percent increase during the decade, or 115,000 new residents. Interesting, the Hispanic population percentage did not increase over the decade as much as expected because a considerable portion of Denver’s influx was White (up 2%) and many Latinos moved elsewhere (down 4%). But, will the growth continue? Pushback on infill, increases in crime, homelessness and taxes give it major challenges in the next decade. 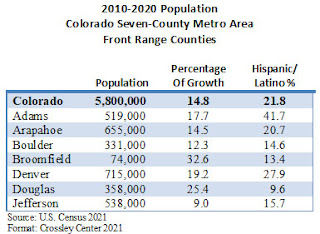 Adams and Arapahoe will drive the white Nazis crazy.

I’m impressed, I have to say. Hardly ever do I encounter a blog that’s both educative and entertaining. Your idea is outstanding; the problem is that not sufficient people speak intelligently about... birthday message for mother-in-law