Colorado Voters Support Mail-in Balloting, But Prefer Dropping It Off

The Colorado mail-back ballot system is considered one of the models in the country. More than 3.2 million used it in the 2020 election – a record voter turnout in the highly contested election with the difficulties of the pandemic year, and Colorado voters support mail-back ballots, but like a drop off return.

Most Colorado voters strongly approve a mail-back voting system. In an online poll conducted during the election by the University of Denver’s Crossley Center for Public Opinion Research and fielded by YouGov, 82 percent of Colorado voters said they “strongly” or “somewhat” approve the mail-back voting system (57% said “strongly approve”) and only 18 percent “strongly” or “somewhat” disapproved. 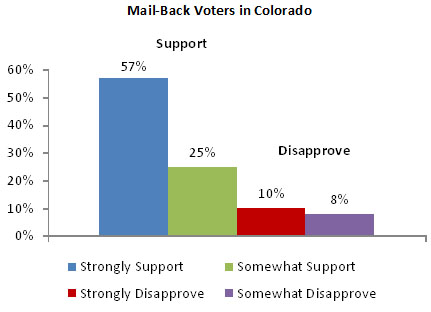 Coloradans like their mail-back system, but prefer a hands-on return. Most voters dropped off their ballots (69%) and few use the mail (16%) or voted in-person (15%).

The methodology and questions in the Colorado voter survey:

An online survey was conducted by the Crossley Center for Public Opinion Research from mid-October to mid-November 2020 during the presidential campaign. The survey was fielded by YouGov with 960 online participants. The margin of error is ±3 percentage points. The following are the questions included about mail-in voting in the general election.

Question: Will you mail in your ballot, drop off in a ballot box or Court House, or vote in person?

With drop boxes every 10 meters, who are those idiots who mail their ballot?