Colorado was the sixth fastest growing state in the union, gaining 774,000 new residents according to the latest Census data (8-13-21). But Pueblo, my home, continues to languish with slow growth, especially compared to the rest of the Front Range.

Pueblo gained a mere 9,000 in the last ten years for 5.7 percent growth while Colorado was up 14.8 percent, twice the nation’s increase of 7.4 percent. El Paso County, Pueblo’s rival to the north, added twelve times more residents (108,000) for 17.4 percent growth. 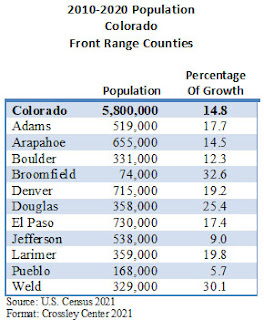