Headlines when the 2020 census data was released in California featured the state continued to grow. Yes, but less than the country (7.4%). The population grew only 6.1 percent over the last ten years while, for example, Colorado grew 14.8 percent. California will lose a congressional seat and Colorado will gain one.

Southern California – historically one of California’s growth engines – languished those ten years. With the exception of Riverside and San Diego counties, the rest, especially giant Los Angeles, grew less than the state and will suffer loses of legislative and congressional clout. 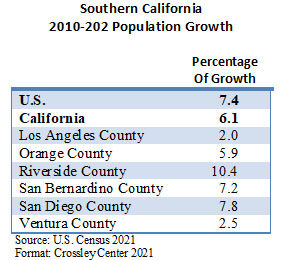 Read: Southern California counties grow while much of the nation shrinks