Although the bulk of the state’s massive growth settled in the Front Range, there was considerable variation among the largest counties. Weld has surged in the last decade to be one of the state’s fastest growing, with land to build on, water and a healthy agriculture and oil and gas industry. 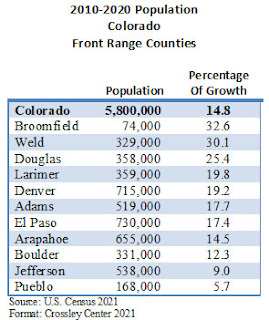 El Paso, frequently in close contest with Denver, retook the crown as the largest county by about 15,000 residents, with a strong military presence and an effective economic development strategy. Jefferson County’s growth has been slow and will likely lag behind Adams and drop to the fourth largest metro county.

Larimer has joined Douglas County as fast growing. New residents have already changed Larimer’s politics from moderate Republican to Democratic. Douglas continues to produce Republican majorities, but the level of local conflict is on the rise.