Biden Collapses with Kabul. Can He Recover?

President Biden’s approval rating was stable over his first six months in office at about 53 percent. Not great, but given today’s polarization and the challenges of governing in the pandemic, not bad. It began to decline with the July resurge of COVID (approval of managing COVID down 12 points) and has now fallen in tandem with the fall of Kabul. Today at 47 percent, Biden’s approval is at its lowest point in his presidency according to the RealClearPolitics average. Most observers expect him to lose another point or two in the next round of national polls. 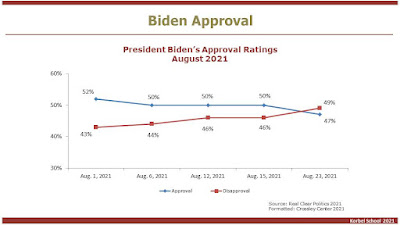 The speed of the descent is as fast as the Taliban’s advance. Nine days (Aug. 6) after the Taliban captured their first capital in the far southwest of the country, to when they marched unopposed into the presidential palace on August 15, to today as the chaotic evacuations dominate news, Biden has been losing support.

Can he recover? Possibly.