The “regret election” is still with us (see blog of March 22). A “regret election” has voters choosing between not who they like the most, but who they have the least regret voting for. A comparison of the polling averages for Hillary Clinton’s and Donald Trump’s favorability ratings at mid-March with early July shows little movement from their high negative-to-positive ratios. Although they both have much higher negative than positive ratings, Clinton’s advantage is that she is viewed somewhat less unfavorably than Donald Trump. 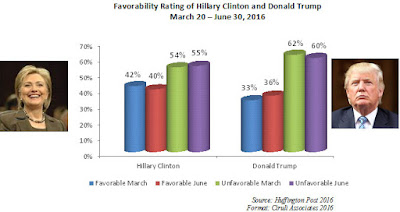 The latest USA Today/Suffolk University poll finds 61 percent of voters “alarmed” by the election. In the poll, Clinton’s unfavorable rating is 53 percent and Trump is 60 percent – an “alarming” choice for voters. It is, no doubt, helping to promote higher support for third-party candidates. Clinton is four points ahead of Trump, with 11 points going to third-party candidates, Gary Johnson (8% Libertarian) and Jill Stein (3% Green).

Also, polls from Gallup the last week confirm:
When asked what word or phrase comes to mine when thinking about Clinton or Trump, why they are poorly thought of by many is explained. For Clinton, although some people like her experience and competence, many more question her honesty and use terms, such as: “don’t trust her,” “dishonest,” “unethical,” “criminal” and “corrupt.” In terms of Trump, his positives, such as “strong leader,” “businessman” and “will turn things around” are more than weighed down by references to his being an “idiot,” “joke,” “an embarrassment,” his temperament “reckless,” “dangerous,” and “scary,” and his views “racist,” “bigoted,” “a hater” and “anti-women.”
Posted by Floyd Ciruli at 9:57:00 AM