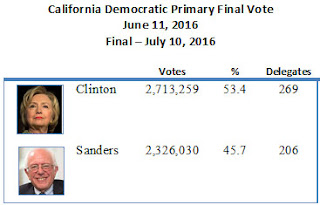 Sanders’s supporters held out that the late count would reverse the result and let them eke out a victory.

The result was well below election night’s early counts, but above the final polls, which claimed the race was within a few points (see blog: Late Polls Miss California’s Primary Results).
Posted by Floyd Ciruli at 1:15:00 PM