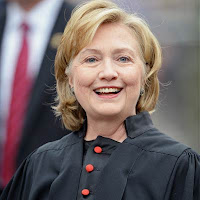 Even before Dallas and Baton Rouge, the police were the second highest rated institution in the U.S. by the annual Gallup’s “confidence in institution” survey, behind the military and ahead of the church or organized religion. A massive surge in sympathy can be expected. But public opinion about police is racially polarized and, hence, a problem for Hillary Clinton. 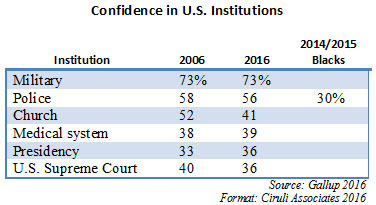 The Black Lives Matter movement has inserted itself strongly into the Democratic Party during the primary process. Clinton desperately needs African American turnout to carry a number of swing states and has joined in the general heightened rhetoric of racial injustice, especially within the criminal justice system, including the police. But, she also faces an electorate concerned about law and disorder.

Bill Clinton faced some of the same pressures during his 1992 election and first years in office, but was able to extricate himself both rhetorically with the Sister Soulja Moment and strong support for the death penalty during the campaign, and substantially with criminal justice sentencing increases and funding for police in his first term.

However, the 2016 Democratic platform repudiates most of his initiatives and advocates abolishing the death penalty, criticizes so-called “mass incarceration” and specifically references the Black Lives Matter movement in its language.

Donald Trump, recognizing the advantage, has become the law and order candidate. In fact, his entire candidacy has been propelled by law and order, first focused on the southern border, then in November 2015 aimed at Muslim immigrants, and now at support for the police. He owns this issue and it’s a winner for him within the Republican Party.

But it’s not clear law and order will move the broader electorate. So far, polls indicate Clinton is preferred on race issues. America is clearly more liberal on various criminal justice issues today (death penalty for example) and more non-White than 1968 when law and order was so much part of the presidential campaign. And in terms of 1968, the disruption today, while serious, seems less widespread. But the direction of the current trend of high-profile incidents of violence is ominous for Democrats.