July 5 will be a critical day in the 2016 presidential election with the FBI Director Comey’s decision of no criminal charges for Hillary Clinton. Up to that point, she has held a modest, but consistent lead over Donald Trump since mid-June and the California primary week. 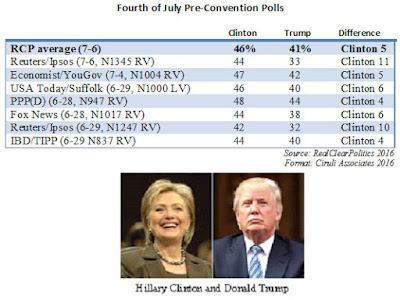 Given the slow start of the Trump campaign (organization and fundraising) and the continued divisions among establishment leaders and core conservatives with the Trump forces, the bigger question might be why Clinton is not an average 10 points ahead?

The answer is her high unfavorability, which will be enhanced by the FBI’s scathing criticism of her behavior, even if no charges.

Trump also benefits from the American version of the Brexit effect. There is a powerful and substantial bloc of voters that want change and inexorably oppose the Washington establishment of which Clinton is the leading representative of.