Darryl Glenn wins the Republican primary on basis of his spectacular State Convention win, powerful endorsements in the last couple weeks of the campaign:

As I said to Alexis Levinson in the National Review:


The run of endorsements has allowed Glenn to carve out a niche as the conservative in the race. Publicly, he has taken stances reminiscent of Cruz: He promised he would not work across the aisle with Democrats, and said he would vote against Mitch McConnell as Senate majority leader. He described himself as an “unapologetic Christian constitutional conservative” in his convention speech. “That is still a very powerful candidate in a low-turnout Republican primary,” says Colorado pollster Floyd Ciruli. 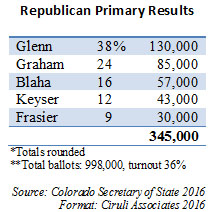