Putin Has Swagger, But Few Friends and Little Support

In the run-up to the Putin-Biden summit in Geneva, Vladimir Putin demonstrated his swagger with glib answers in an exclusive NBC interview, offered Iran intelligence technology to undermine the defense of U.S. troops in the region and launched war games off Hawaii. But, President Putin has few friends in the nations of Europe, which Russia is a part of, and little public support. When 16 democratic countries were asked their level of confidence in world leaders, Putin (20%) was near the bottom, with President Xi Jinping (18%) of China. 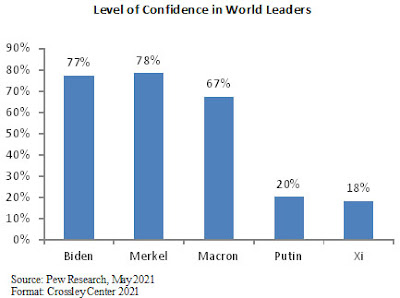