“America is back” became a mantra of President Biden’s on his first overseas trip to allies at the G7 in Cornwall, England, and a NATO meeting in Brussels. Most allies welcomed America being back, supporting the alliance, the NATO commitment and multilateralism in general.

Biden is right, at least America’s reputation is back from the collapse during the Trump presidency. The U.S. favorability as measured by Pew Research among 16 world democracies surged from 34 percent favorability at the end of Trump’s term to 62 percent in May 2021. Confidence in Biden personally is at 75 percent whereas former President Trump left office with a 17 percent confidence level. 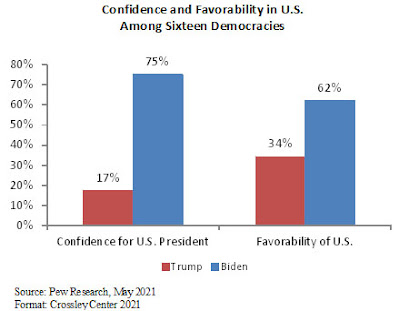 Biden joins Western world leaders with a high level of confidence (77%) – much higher than Vladimir Putin (20%) or Xi Jinping (18%), the Russian and Chinese presidents, respectively. He joins at the highest level of public confidence with German Chancellor Angela Merkel (78%) and French President Emmanuel Macron (67%).