A Bloomberg Government political article by Tripp Baltz on Colorado’s first redistricting map captures the political fight that’s developing as Democrats are unhappy in general with a map that leaves the party with only a registration lead in 4 out of 8 districts, even though they have dominated the state for most of the decade. They are especially disappointed that Lauren Boebert’s Western Slope district, one of their top targets, has received increased Republican registration in the first map published by Colorado’s new registration commission. They are also unhappy with the redrawn 7th district of Congressman Ed Perlmutter, which shifts south to an area he hasn’t represented and tilts Republican by 4 percentage points.

I was quoted saying:

One incumbent who might disagree is eight-term Rep. Ed Perlmutter (D), whose home base under the initial proposal would be part of a district that includes what University of Denver professor Floyd Ciruli called the “Republican heartland” of the south Denver metro area. 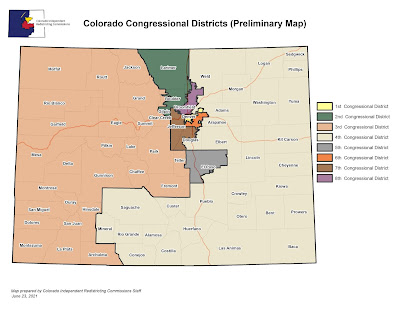