The Scientific and Cultural Facilities District (SCFD) has been a significant economic generator contributing billions during its 30-year existence and employing thousands through its more than 300 member cultural organizations. And, of course, it faced the same crisis that local governments faced in early 2020, the beginning of the pandemic.

Although the seven-county sales tax collection for the SCFD was down by about 3 percent (2.8%) last year, it still managed to collect $64.3 million in 2020 compared to $66.1 million in 2019, which was a record. That was considerably more revenue than expected. A loss of 10 to 20 percent was projected early in the shutdown. The better tax performance indicated that the shutdown reduced activity after March 2020, but did not stop much of the spending that collects sales tax. The funding was desperately needed by metro Denver cultural organizations that had lost visitor revenue as they were mostly forced to turn away audiences, curtail programs and furlough employees. Many were able to provide virtual programming, but still suffered major losses of incomes.

Since this year’s reopening, regional sales tax collections have accelerated with a record-breaking pace. March tax receipts were up 36.6 percent compared to March 2020 and year-to-date revenue was up 13.4 percent. The April year-to-date is up a spectacular 17.2 percent. Revenue increases will likely begin to level off later in the year, but for there is a significant economic recovery underway. Most Denver metro cultural organizations have restarted their programs and are planning numerous summer events that were delayed last year. 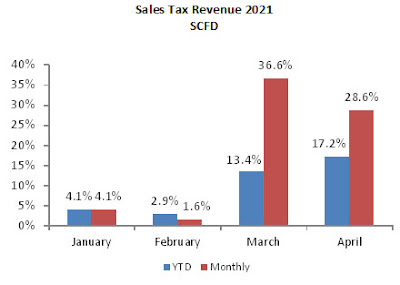