Some media have speculated in the last few days that the Tokyo Olympics could be cancelled due to political opposition. Don’t bet on it. In spite of considerable controversy, the Japanese government and Prime Minister Suga are pushing ahead. And if you read news of athletes and the competition, excitement is building for the once postponed start.

Although the public in Japan are hostile to the event, mostly on COVID-19 grounds (60% of public in recent poll want the games cancelled), a recent poll in America shows that a significant U.S. audience is interested in the event and will watch. So, the Olympic Committee, the athletes and the Japanese Olympics will have an audience regardless of the delay and the protocols.

Americans are used to watching sporting events without fans and half the “population (49%) said they planned to watch part of the games,” that is about equal to the number of viewers of the Rio games in 2016 (51%). Sixty-two percent said the lack of fans will not deter them from watching it on TV. And sports fans are even more interested (65%).

The poll was conducted by Stillman School of Business at Seton Hall University as part of their annual sports survey for their sports management program (May 2021). 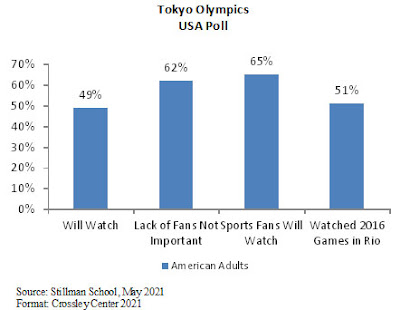