COVID-19 infections and death totals have accelerated outside of the most developed countries. And several non-western European and Asian countries that had appeared to master the virus have had recent surges. But, the main loss of life is concentrated in large third and second world countries with high poverty rates, inadequate health care infrastructures, and weak or conflicted leadership. The frontrunner nations with deaths outside of the U.S. are Brazil, India and Mexico – the epitome of weak health care systems, massive poverty and inconsistent leadership. These three countries represent nearly 30 percent of the world total.

While the world fatalities raced ahead by 1.5 million during the last four months (75%), Brazil and India death totals double. Many doubt some of the published numbers’ failure to capture thousands of deaths in homes outside of hospitals and other medical facilities. 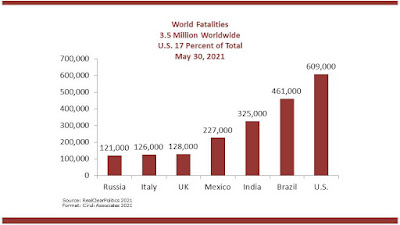 The origin of the virus continues to be a controversy. A WHO investigation leaned toward an animal to human origin, but without certainty and lacking full Chinese cooperation. Doubts continue to be raised as to a possible lab origin. And President Biden just ordered an investigation using U.S. and willing partners’ sources of intelligence as to the likely origin. Not good news for China’s aggressive public relations foreign policy apparatus. When more than 3 million people die, knowing the true origin of the virus is a humanitarian and national security priority.
Read:
Trump Hands Off 400,000 COVID-19 Fatalities
Biden Doubles Vaccination Goal in First 100 Days to 200Million
Posted by Floyd Ciruli at 1:28:00 PM