Like Donald Trump’s approval rating, Joe Biden’s has been steady, but unlike Trump’s, it’s positive. In fact, it’s nearly an inverse. In early June, former President Trump had a 39 percent approval and a 55 percent disapproval, or 16 point negative. President Biden has a 53 percent approval and 41 percent disapproval, or a 12 point positive rating. (Trump needed another year to get to 41% approval, his more common rating – Gallup.) (Data from RealClearPolitics, 2021)

Also, Americans are in a better mood. The 42 percent of Americans rating the country moving in a positive direction is a high since 2013, the Dow Jones Industrial average is up 13 percent since January and unemployment just dropped below 6 percent, the lowest since the pandemic shutdown started in March 2020. 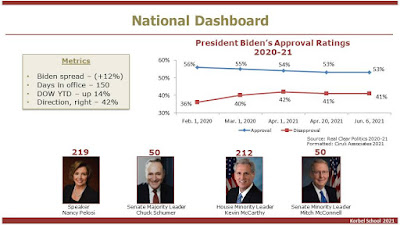 Not surprising, Biden’s approval rating is polarized, with Democrats offering 88 percent approval, independents 55 percent and Republicans 16 percent. The 72 percent difference between the parties shows the strong polarization, but the 16 percent approval from Republicans is relatively high for recent times (Ipsos, June 2021).