Polls and pundits had expected 15 to 20 percent would be the ultimate unaffiliated share of the total vote. That means if the total vote is above the 645,000 the Secretary of State reported voted in the 2016 primary and it could get close to one million, approximately 150,000 to 200,000 will be unaffiliated voters – a very significant number. 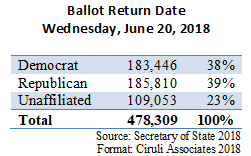 Eighty percent of the returns a week before the election are from the eleven largest counties, with El Paso, Arapahoe and Jefferson leading the pack. A few notable facts: Denver is lagging in early returns; Democratic returns are slightly ahead in both Arapahoe and Jefferson; and large numbers of Democratic ballots were used by unaffiliated in Arapahoe, Boulder, Jefferson and Larimer. 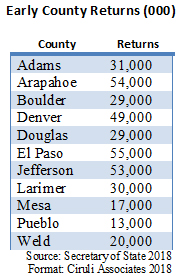 See Secretary of State ballots received here
Posted by Floyd Ciruli at 9:34:00 AM