From Bush to Trump, Colorado Republican Party Faces a Challenge

A number of factors have slipped the Republican Party into third place in Colorado in presidential performance. George W. Bush won the state by 8 points in 2000 and Donald Trump lost it by 5 in 2016. That 13-point swing wasn’t just about the charisma of Barack Obama. Even the highly unpopular Hillary Clinton led the Democrats to a 5-point win.

Because of recent growth, the power driver of the state has become the metro area, and Trump was crushed in metro Denver. He lost all the large counties, except Douglas. He lost Arapahoe County by 14 points and Jefferson by 7 points. Denver, the dominant population center, gave Hillary Clinton 74 percent, or a 55-point deficit for Trump. 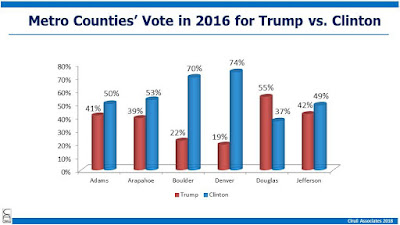 A comparison between the Republican Party’s strength in the 2000 presidential election by county shows the swing from Bush to Trump in 2016. Bush carried Arapahoe and Jefferson counties, and comparing 2000 to 2016, Republicans performed 12 points better in 2000 in Arapahoe and 9 points better in Jefferson. Bush lost Boulder and Denver, but managed to get into the “thirties,” or more than 10 points above Trump’s total in each. In more blue collar Adams, Trump was only 3 points behind Bush. Although Trump won Douglas, he trailed Bush’s 2000 win by 10 points. 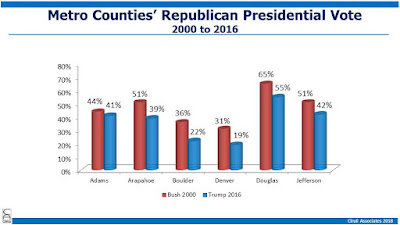 When "the leader" of your GOPer party is an evil, know nothing, then maybe you are in trouble.