Trump Rally is Over

The Dow Jones Industrial average began its decline as volatility increased. Two hundred-point daily fluctuations have become common. It hit a low of 23957 on March 22, and climbed back to 24415 by the end of May. But few expect the gains of the last year and a half to resume. Trade wars and problems in Europe join the volatility of the White House to roil the market in spite of job growth, tax cuts, positive earnings reports and deregulation. 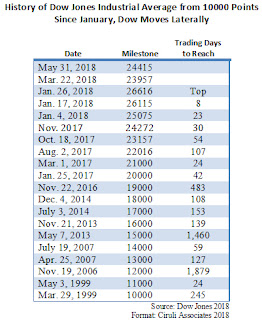 Trump’s anti-establishment, anti-immigrant positions have encouraged Italian and other anti-EU, ethno nationalists. The administration’s pro tariff and combative foreign policy has alienated old allies and emboldened new adversaries. Beyond the politics, there is a sense the long boom is ending, interest rates are climbing and a recession is looming.
Posted by Floyd Ciruli at 10:45:00 AM

I despise The Dumpster®, but the market is doing just fine.
Look at the NASDAQ and the S&P500.