Unaffiliated Ballot Total Above 200,000; One Million Could Vote in Historic Primary Election

Primary voting is up and a record number of unaffiliated voters have participated. The 2018 primary election is making history. Both parties are having tough primaries that could produce a major shift in the direction of state government. Highlighting the importance of the gubernatorial primaries is the record expenditure. As of early June, $35 million had been spent.

Turnout is up, well over 800,000 voters and approaching one million, and more than 200,000 will be unaffiliated voters – new participants in the primary process, a major change to the politics of the state’s nominating system. 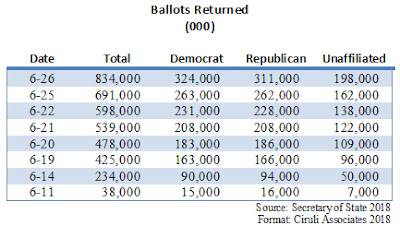 Who are are all the clueless people who did not vote by June 11th?