Metro Counties on a Growth Tear for More Than a Decade

Colorado’s rapid growth is one of the major influences affecting Colorado’s politics. The state’s county commissioners recently heard a presentation at their annual Colorado Counties Inc. conference that included a slide about the growth in the Denver metro area since 2000. The PowerPoint slide shown below presents the growth in the six largest metro counties from 2000 to 2017, the most recent census data.

Colorado’s population has grown from 4.3 million in 2000 to 5.6 million today, or a 30 percent increase. More than half that growth has been in the six-county metro area, which jumped 684,000 residents from 2.4 million to 3.1 million. 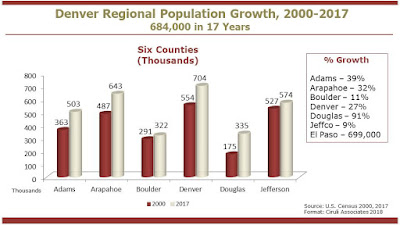 Some facts about the metro area 17 years of rapid growth:
Note: Broomfield wasn’t a county in 2000 and would increase the current total metro population by about 50,000.

Who selected those hideous colors for the slide?