The government shutdown in 2013 was caused by a confrontation with Obamacare opponents and divided party government. It lasted 16 days in October as Republicans shed points in national polls. Minority Leader Mitch McConnell got credit for settling it and has promised it won’t happen this year.

It would be profoundly stupid for the Republican Party, which controls all three branches of government, to let it shut down over internal policy disputes, especially after the Obamacare repeal and replace collapse. 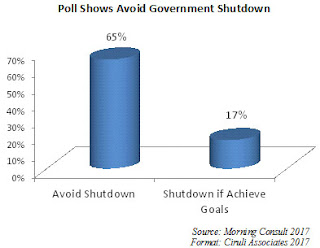