Governor’s Race Could Be Most Competitive in Two Decades

The last time Democrats had a primary was 1998 when Lt. Governor Gail Schoettler won the Democratic primary, but lost the General Election to Republican Bill Owens by 8,000 votes. Democrats had dominated the governorship since Dick Lamm was first elected in 1974. 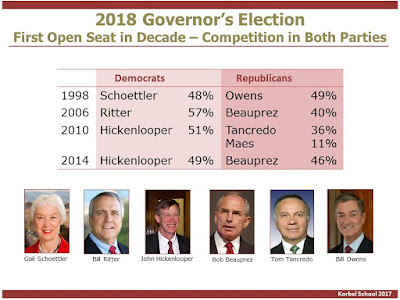 Since Owens’ eight years, Democrats have won it for a decade, but without primaries. In 2018, a host of strong Democratic and Republican gubernatorial candidates will seek their party’s nominations in contested primaries. Both current and former elected officials and outside business leaders appear interested in the open seat governor’s position, producing likely record-levels of expenditures.

Although the state has moved slightly to the left since Bill Owens was first elected, Republicans seem to do well in off-year state-level elections, winning all three constitutional offices in 2014. The Colorado governor’s race could be one of the most competitive in the country. Obviously, how Donald Trump is doing will be a factor.
Posted by Floyd Ciruli at 10:29:00 AM