Morning Consult, an online poll from web journal Politico, asked a national sample of its participants the job performance of the governors and senators of every state. Governor John Hickenlooper and Senators Michael Bennet and Cory Gardner have middling ratings.

Governor
The highest rated governors received scores in the mid-sixty percent range and above. Charlie Baker, a Democrat in Massachusetts, had the highest approval at 75 percent. The highest rated large-state governor was Greg Abbott (R) of Texas (64%). Westerners Brian Sandoval (R) of Nevada and Gary Herbert (R) of Utah also had 64 percent approvals.

John Hickenlooper was in the upper half of the list of 50 governors with 61 percent, joined by nearby governor Matt Mead (R) in Wyoming (60%) and Steve Bullock (R) in Montana (59%). The governor with the lowest approval was Chris Christie at 25 percent.

Senate
Small state senators were more popular than those in large states. At the top were Vermont Democrats Bernie Sanders (I) with 75 percent and Patrick Leahy (D) 70 percent approvals. Wyoming’s and Maine’s two senators were next with approval ratings above 66 percent. Also, they all had single digit “don’t know” ratings. Their citizens know them.

Colorado’s two senators were in the lower half of the list, with Michael Bennet at 54 percent and Cory Gardner receiving 49 percent approval. They both had high percentage of people who could not rate them. 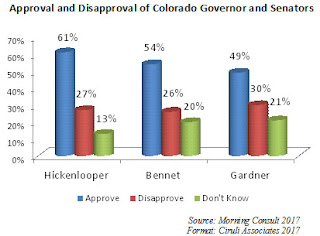