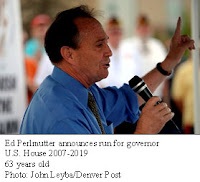 The race for governor has started early, reflecting a lot of pent up interest among the political class.
And although Congressman Ed Perlmutter is now seen as the Democratic frontrunner, a primary is still expected and the general election is likely to be competitive.

Perlmutter is well-liked in a party that has produced a lot of Colorado winners in the 21st century. He is a good fundraiser and represents an important part of the Denver metro area. Jefferson County, his home base, has given statewide Democrats a generous margin of votes.

But, he is unlikely to clear the Democratic field. The open gubernatorial seat has attracted a new generation of Democrats. Perlmutter, a Baby Boomer, represents the establishment. Mike Johnston, Cary Kennedy, Noel Ginsburg and other rumored candidates will not walk away from the race. The primary will rough up Perlmutter’s friendly reputation.

His biggest liability, especially in the general election, is the decade in Washington, mostly during the Obama years. It is hardly the resume builder one wants to run in Colorado on. He arrived in Washington with the super-sized Democratic class of 2006, which made Nancy Pelosi the Speaker. He was a loyal soldier in the Democratic years of control. But since 2010, he has been in the minority.

Most likely, Perlmutter will try to run away from D.C., claiming it’s a mess that he tried to fix. Given his voting record and party loyalty, it may be a tough case to make. He dealt with Obamacare and the gridlock on his watch. He is the candidate of the teachers union, good for a Democratic primary, but controversial in the general election. Perlmutter is a liberal, especially on land use and the environment. The fracking issue is going to dog the Democratic primary and possibly produce division between him and parts of the party. It may leave him with a fractious party and a mass of gas and oil money in opposition.

Perlmutter made a strong entrance, but having started early, it will be a long season.
Posted by Floyd Ciruli at 10:32:00 AM