Although it is too early to know the cast of politicians who seriously intend on contesting the 2018 gubernatorial election, many of those showing interest are in a position to spend significant personal wealth or have access to wealthy individuals and political committees. A back of envelope estimate indicates that a $25 million primary for both parties would not be unimaginable.

Among the Democrats, Jared Polis could be the biggest spender. He has spent whatever it takes to win all the primaries he’s ever competed in (estimated in 2018: $3 to $5 million). Ed Perlmutter is probably the frontrunner and much of the Democratic establishment’s candidate. As a seated congressman, he can call on significant D.C. interests to support him ($2 to $4 million). Noel Ginsburg has funds and personal money that could be spent ($1 to $2 million). Mike Johnston could likely raise funds from individual sources ($1- $3 million).

On the Republican side, Walker Stapleton has major out-of-state sources from the Bush network ($2 to $4 million). Victor Mitchell has indicated he will spend personal money to win ($2 to $4 million). Kent Thiry, who would try to appeal to independent voters (and may run as an Independent), could invest whatever needed ($5 to $7 million). Jack Graham spent $1 million last time and will probably need to commit more this time ($2 to $3 million).

This partial list of guesstimates indicates a low of $18 million and a high of $30 million could be spent in the 2018 gubernatorial primary. 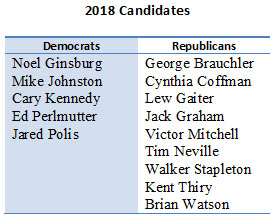 You will lose all credibility. You are old school. In the future you will lose authority. When you speculate on candidates running for Governor! When they are not. Relevance will TRUMP, your speculative political rhetoric!